Rebirth Brass Band – latest brass band to blow me away 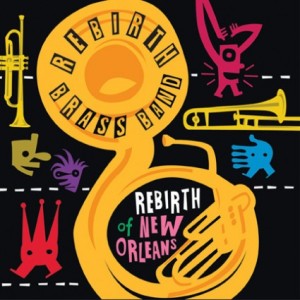 I recently made a trip to Waterloo Records and grabbed the first thing that jumped out at me: Rebirth of New Orleans, by the Rebirth Brass Band. It pretty much blows me away. I discovered them last Mardi Gras, when I was digging through Youtube, looking for music from New Orleans.

They remind me a bit of the Dirty Dozen Brass Band, a group I got to see in Austin a few years ago. It’s a great jazzy mixture of New Orleans second line, funk and hip hop. Great horn playing. It’s also an interesting segue from the last batch of CD purchases I made, featuring Balkan brass band music, much of it created by European Gypsies.

In both cases, you have extremely skilled musicians from cultures that know what it’s like to go through bad times — yet they still know how to enjoy life and spread that joy to others. In short, they have passion.

This isn’t on the latest album, but it’s awesome — The Rebirth Brass Band in the French Quarter, in 2008:

Now check this out:

Kinda different, but kinda the same too, don’t you think?

Daniel Knox in the shadows next to a carousel. Captures something about his music I think.... (John Atwood photo)

The first time I heard Daniel Knox’s “Ghostsong” I was stunned. It was like nothing I had ever heard, but at the same time it sounded so classic, full of beauty, sadness and mean-spirited humor.

I streamed it over the Internet for a few days, growing more and more addicted and finally I couldn’t take it any more. I went to his website and ordered his whole discography.

That’s something I rarely do — I’m not made out of money. But I could tell right away that I had to get my hands on this man’s music and keep it close, on the off chance it could turn out to be a dream, or something the Internet washed onto my shore that it might sweep away again.

There was more where “Ghostsong” came from. Much more. I now think of Knox as an American treasure, right up there with Tom Waits.

Knox taught himself to play the piano by regularly sneaking into the Hilton Tower’s Grand Ballroom; he took a job as a projectionist at the historic Music Box Theater just so he could play its massive pipe organ. He accompanied director David Lynch in that theater for the 2007 Chicago premiere of Inland Empire.

Much of the time he sings in a deep, masculine voice. Then he breaks into a beautiful, sweet falsetto. His songs range from heartbreaking ballads (often with wicked twists), to brash, New Orleans-influenced pieces that put me in mind of Dr. John.

His songs don’t really sound like anything else. And yet i get the distinct feeling they might’ve been around forever — American standards.

Here’s a taste of what Daniel Knox can do:

I currently have the albums Disaster, Evryman for Himself (technically not released yet, but I was able to get hold of it – send DK a message and he will probably hook you up) and two E.P.s: A Poison Tree and Window Music (Instrumentals 2001-2007).

At this point I have a hard time deciding which I like better, Disaster or Evryman. Disaster is a bit more minimalistic, with those lovely dark ballads, often just Knox and a piano or organ. Those songs really get to me — “What Have They Done to You Now” and “Be Afraid” being particular favorites.

Evryman has some of those — “Ghostsong” being a huge standout — but it also features more New Orleans style songs, with bandmates Paul Parts (bass), Jason Toth (drums), Ralph Carney (horns) and Chris Hefner (auxiliary instruments). “I Make Enemies” and “Debt Collector” are excellent as is “Armageddonsong.” I got to love those too. They might be the ones with the biggest hit potential after all.

The E.P. A Poison Tree is also definitely worth having for the two very different treatments of John Donne’s famous poem.

It’s not all about the music either. Knox’s lyrics have a big impact — sad and misanthropic, resigned and fatalistic, wry and witty, vulnerable to warm feelings — which are seen as a distraction and an imposition…

They might not work for everyone, but I find them brilliant and moving.

Just check out some of the lines:

From “Armageddonsong”: “Armageddon’s comin’ soon. The sun will crash into the moon, but we will still have breakfast…”

From “Lovescene”: “Groping for more than I can hold, sulking like a 12-year-old, and suddenly I find myself dancing. Oh how I hate dancing…”

From “Ghostsong”: “If you die tomorrow or a hundred years from now, there won’t be an article or a furrowed brow. Yours is like the spirit of a breeze that blows through town. No one remembers unless it knocks something down…”

Truly brilliant. I think this guy is going places. If I have anything to do with he will. I haven’t been so excited about a newly discovered artist in a long time. He’s already made it to the top of my own musical Olympus.

If you’re anywhere close to as impressed as I am, check out his website and buy some of his albums. Then find him on Facebook. He just might go on tour one of these days and you’ll want to be ready in case he comes to your town.

Just found a great place to stream music: www.radiofreeneworleans.com It’s a feature of NewOrleansOnline.com, which is the official tourism website for the city of New Orleans. I’ve heard so much great music: people I knew already like Professor Longhair, Dr. John, Neville Brothers and Fats Domino; plus great acts that were new to me like the Rebirth Brass Band and the Soul Rebels.

Check these guys out. I heard about them on NPR the other day and finally decided to look them up. So funky! I’d like to see them live someday.

I went out on a CD run a while back and spent more than I probably should have in Waterloo Records. On a whim, I stopped at a Goodwill on the way home and checked out their CD stash. Saw a few likely ones that I already had or that were too scratchy. Got tired of looking and decided to give this one a chance. And it might have been the best thing I got that day. Also interesting, because I was in a Texas music mood that day and didn’t know Anson Funderburgh was a Texan till I looked him up.

Sins, released in 1988 by New Orleans-based Black Top Records features some great rockin’ blues and R&B. Funderburgh is a great blues guitarist with a hell of a band and Sam Myers, who was the band’s regular singer and harmonica player from 1985 until he died in 2006. If you’re into any classic blues by the likes of BB King, you should check this band out. I will certainly pick up more of their albums when I need to scratch that particular itch. Kind of embarrassing in a way – this is a band I should’ve known about already. Better late than never I reckon, though I really wish I could’ve caught them live while Sam Myers was still around.

Interesting bit of trivia I picked up from Wikipedia: He wasn’t on this particular album, but in 1989 and 1990 Mike Judge was their bassist before he went on to greater fame as the animator and creator of Beavis and Butt-head and King of the Hill.

(The other ones I got on the same CD run were Long Leaf Pine by San Antonio-based The Krayolas and a 2-CD compilation of Texas Swing by Adolph Hofner. I haven’t made up my mind about those yet. I’m still digesting them. Especially the Hofner comp – 35 is a lot of songs!)